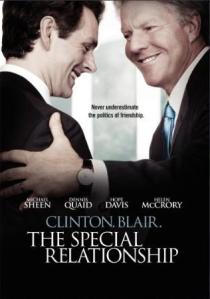 This film is only a little bit about how President Bill Clinton and Prime Minister Tony Blair both had huge man crushes on each other.  That is definitely a factor, though.

The Special Relationship is an HBO film about the closer than usual relationship the two men had, how it started, and how it panned out over the course of Clinton’s presidency.  As the credits roll it addresses Blair’s relationship with President Bush using actual footage of the two of them.  (It’s honestly the funniest part of the whole damn movie.  I swear I count my blessings everyday just knowing Bush is out of office.  He is a walking punch line.)

Anywho, the film begins in about 1996 before Blair’s party is elected and he is appointed Prime Minister.  Clinton takes a special interest in him, having a good feeling about his future as leader.  Once Blair wins, he makes his firm stance that the United States has a very strong ally in the United Kingdom.  And then Bill jizzes on a blue dress, and Blair gets a little pissed at him for that.  But they have something special, so he gets over it, as does the rest of the world (miraculously).

Toward the end of Clinton’s presidency, Blair vows to tackle the conflict in Northern Ireland and the genocide in Kosovo.  He begs for the US’s help in Kosovo, but Clinton refuses, claiming most Americans have never even heard of the place, so getting the common person on board would be impossible.  Following the meeting, Blair gives an impassioned speech in Chicago publicly shaming America for not stepping up to end the mass destruction happening in Kosovo.  It was pretty well received (according to the film) by everyone but Clinton, of course.  But as is true with all healthy relationships, conflict is crucial and this hiccup didn’t slow these two love birds down a bit.

As Clinton leaves office, Blair has basically the entire world’s approval.  Clinton warns him, however, about the dirty political games Bush and his party plays.  As we all know, Bush and Blair aren’t nearly as close, considering their polar opposite stances on a great many things, solidifying Clinton and Blair’s relationship as quite unique.

The film’s title really is one of the most apt titles I’ve heard in a while.  There’s not a better way to describe the two of them.  It actually comes from the “special relationship” our two countries have, being inextricably linked historically, and all.  Blair (Michael Sheen) addresses it with Clinton (Dennis Quaid) early on in the film, but even then it sounds the tiniest bit homoerotic.  Which is fine with me.  In actuality, I’m a little disappointed they didn’t make out at any point.

It was an interesting little movie.  Then again, I guess that depends on a couple of factors:  how big of a nerd you are, whether or not you are old enough to remember when all of these things happened, and how much you like Michael Sheen.  I just happen to have the right ratio of nerdiness:age:love of Sheen to be the perfect fit for a film like this.

One thought on ““I like him”: The Special Relationship”